When Rolex updated its legendary Explorer and Explorer II models last year, the brand expanded a legacy that dates back to the 1930s, when it equipped early expeditions in the Himalayas to test how its watches performed under extreme conditions.

Most famously, Rolex outfitted the 1953 expedition of Sir Edmund Hillary and Tenzing Norgay that reached the summit of Mount Everest. To mark the milestone, the brand introduced the Explorer that same year. And in 1971, it followed up with Explorer II, which became the go-to watch for polar explorers, speleologists, and volcanologists.

“A reliable and high-performing watch is an essential companion to any adventurer setting out on a major expedition,” said the Italian mountaineer, explorer, and author Reinhold Messner, at last year’s launch of the Montblanc 1858 Geosphere Messner Limited Edition ($6,500).

The special edition of 262 pieces is the culmination of Messner’s long partnership with Montblanc and pays homage to his accomplishments and all the peaks over 26,200 feet that he ascended over the course of his career. His route, dubbed Messner’s List, is one of four approaches to the Seven Summits Challenge—climbing the highest peak on each of the seven continents.

In 2018, Montblanc launched the 1858 Geosphere with a particularly novel way of displaying the world time complication—two turning domed discs representing the Northern and Southern hemispheres. 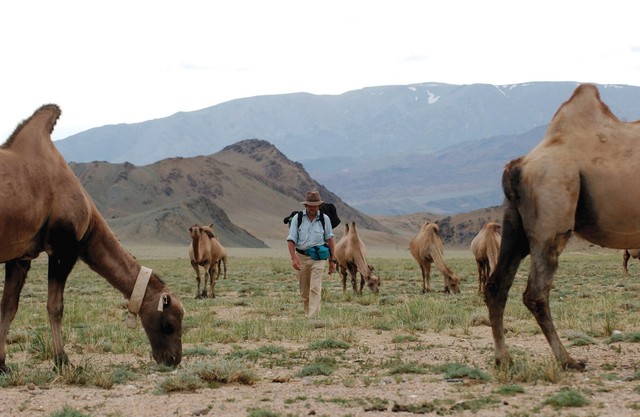 In tribute to Messner, the 42mm bronze edition’s turning hemispheres are marked with red dots representing the Seven Summits. The caseback features an image of Mont Blanc, the complete Messner list, a compass, and two crossed ice axes, plus an engraving of Messner’s signature.

Last fall, Vacheron Constantin unveiled two bold Everest editions of its sporty Overseas, each limited to 150 pieces. The 42.5mm Overseas Chronograph Everest ($37,000) and the 41mm Overseas Dual Time Everest ($31,300) evolved from a special titanium-and-steel Overseas Dual Time produced for American explorer and photographer Cory Richards, who made his third ascent of Everest in 2019.

Both models exhibit Overseas’ trademark six-sided notched bezel, a nod to the brand’s Maltese Cross emblem. Lightweight, robust titanium was used for the case, bezel, pushers, and pusher guards, while a grained-finish dark blue-gray dial with orange hands is treated with Super-LumiNova for legibility after dark. Vacheron’s tool-free interchangeable strap system lets you change from the Cordura strap with orange contrast stitching to a gray rubber option on a whim.

For almost 20 years, explorer Mike Horn has been a Panerai ambassador and collaborator. Among Horn’s accomplishments are a winter expedition to the North Pole, summiting some of the world’s highest and most challenging peaks without supplemental oxygen, and a sailing circumnavigation of the globe across every continent and ocean. Last fall, Panerai introduced its most recent Mike Horn special edition, the Submersible Chrono Flyback Mike Horn Edition dive watch ($20,500), limited to 500 pieces. Built to stand up to the rigors of a Horn expedition, the 47mm case is made of brushed titanium fitted with a black matte ceramic ring within the unidirectional bezel for keeping track of dive times and screw-down chronograph pushers for superior water resistance. The dark blue dial is punctuated with white applied indices and bright yellow central chronograph hands.

Endowed with a three-day power reserve and water resistance down to about 300 meters, the piece is powered by the P.9100 movement, Panerai’s first automatic chronograph featuring a flyback function that lets you reset and restart the chrono timer with a single press on the pusher at 8 o’clock. Two straps—a blue rubber accordion strap and the new UPCamo bimaterial strap composed of rubber and a camouflage fabric inspired by Italian Navy uniforms—can be switched out. The watch and accessories are delivered in a presentation box made from recycled plastic.

And for those loyal Panerai collectors who want to get in on the action and are willing to pay a significant upcharge, the brand’s Experience watches allow you to accompany Horn and other adventurers on a bucket-list expedition.