With the world’s most glamorous rail journeys, the journey matters just as much, if not more than, the destination. There’s nothing quite like hopping on a train to explore a new destination, especially if there are amazing stops and lots of pampering along the way. 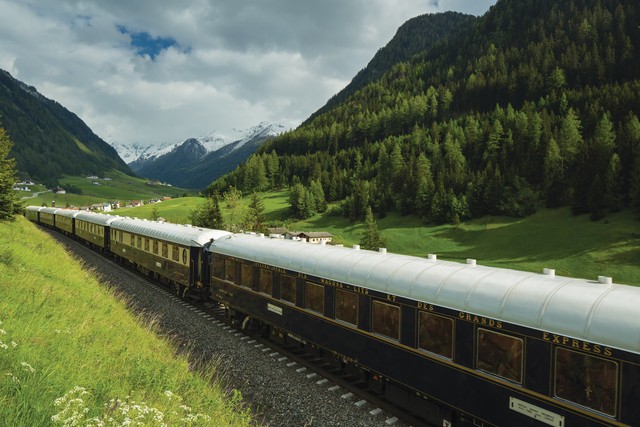 The legendary Venice Simplon-Orient-Express offers white-glove service and even has a dress code.

Even jaded travelers used to first-class travel revel in the all-day luxuries offered by the most iconic train experiences. Sitting in a comfy window seat, drink in hand, while gazing out at an endless stream of gorgeous scenery is a unique thrill that never goes out of fashion.

Here are some of the most luxurious train rides around the world; all aboard for some adventure.

Belmond has been a pioneer of luxury rail travel for more than four decades. Its portfolio, which extends across 24 countries, includes six train offerings, headlined by the legendary Venice Simplon-Orient-Express. Guests retrace the steps of their predecessors—there’s a dress code and plenty of white-gloved stewards—on a journey between Venice, Italy, and classic culture capitals like Berlin and Paris; new boarding points have been added in Rome, Florence, Geneva, Brussels, and Amsterdam. Lovingly restored sleeper cars harken back to the 1920s and ’30s, with sumptuous fabrics and antique fixtures. The train boasts three restaurant cars, all hailing from the 1920s, each featuring memorable touches. Sitting in the train’s oldest carriage are three new Grand Suites conceived by the renowned interior design studio Wimberly Interiors. Each suite features private bathrooms with showers, double beds, and a living area with underfloor heating. Additional amenities include a personal 24-hour cabin steward, free-flowing Champagne, in-suite dining, and private transfers.

A grand suite in the Venice Simplon-Orient-Express comes complete with its own cabin steward, in-suite dining, and free-flowing Champagne.

Belmond’s British Pullman has been given a jolt of panache by the influential filmmaker Wes Anderson. Paying tribute to both the golden age of cinema and travel, Anderson has reimagined the train’s historic Cygnus carriage—named after the Greek God of Balance—enhancing the historical preservation of the Art Deco-inspired space with his signature symmetrical lines, unique color palettes, and Art Nouveau style. Guests choose between a table in the main carriage or a private coupé for an elevated guest experience, complete with copious amounts of Veuve Clicquot Champagne, exclusive dining menus, and unique crockery and glassware selected by Anderson. The Pullman offers a host of day journeys throughout the year, conveniently departing from London’s Victoria Station.

As the crown jewel of the Portugal railway system, The Presidential Train has hosted global dignitaries and heads of state for more than a century. Built in 1890, it once served as the Portuguese Royal Train, transporting dignitaries like Queen Elizabeth II and Pope Paul VI. Present day passengers feel like they’re in a time capsule, as the train was magnificently restored in 2010; the furniture and charm that made it iconic remains intact and has since been showcased at the National Railway Museum as the most emblematic piece of Portugal’s railway history. Gastronomical highlights come fast and furious, as Michelin-starred chefs pair dishes with fine Portuguese wines.

The British Pullman has been given the Hollywood treatment by director Wes Anderson. Day and longer journeys are available.

Belmond’s Eastern & Oriental Express appeals to those who yearn for the romance and nostalgia of a bygone era, when travel was best experienced at an unhurried pace. Travelers step into a world of classic glamour as they cruise through historic wonders and bustling cities on multinight journeys throughout Bangkok, Singapore, and Kuala Lumpur. Beyond the luxe accommodations with cherrywood and elm burr paneling, fine fabrics, and vintage touches, highlights include steward service, gourmet meals, and engaging excursions at each stop. Guests can enjoy a foot massage in the saloon car, then stroll over to the lively piano bar or stylish observation car to have a cocktail while taking in panoramic sunset views.

The world’s leading provider of long-distance luxury rail journeys, Golden Eagle Luxury Trains provides access to some of the most magnificent, yet rarely visited, sites from the ancient world. Four new tours are being launched in 2022, including two that are powered entirely by steam. But it is Golden Eagle’s Trans-Siberian Railway that gets most of the attention; one of the world’s great train journeys cuts through the heart of Russia, connecting the east with the west. At 9,288 kilometers in length, it’s the longest single-service railway in the world, crossing eight time zones as it progresses from Moscow to Vladivostok. Luxurious suites and heritage cabins provide a fanciful backdrop for all the creature comforts one could hope for while traversing the largest country on Earth. Patrons can pass the time by taking Russian language lessons or dancing to a live pianist.

Since its launch in 2013 as Japan’s first luxury sleeper train, Cruise Train Seven Stars has become one of the country’s most in-demand luxury travel experiences. The train, which traverses the scenic island of Kyushu, has just seven carriages for 30 people, and customers must enter a lottery process to secure a ticket. Inside, the interiors celebrate Japanese artisans with rich colors, wood paneling, and lattice screens. Multiday itineraries whisk travelers through five of Kyushu’s prefectures, with stunning coastal views and immersive cultural experiences. Passengers sip on cocktails in the piano bar, then decamp to the dining car for gourmet meals crafted with seasonal ingredients.

With routes running between Kyoto and other Japanese cities, JR West’s Twilight Express Mizukaze offers a one-of-a-kind travel experience. Likened to a tony hotel rolling through the beautiful Japanese landscape, the Twilight Express lets its guests soak in a marble bathtub while zooming through highlights such as the Akashi Kaikyo Bridge (the world’s longest suspension bridge), the serene Setonaikai National Park, and the stunning Orii Coast. On the culinary side, a team of top Japanese chefs curates an inviting menu reflecting the regions through which the train passes.

The bar and the interior of a suite on the Venice Simplon-Orient-Express, among the most famous trains in the world. 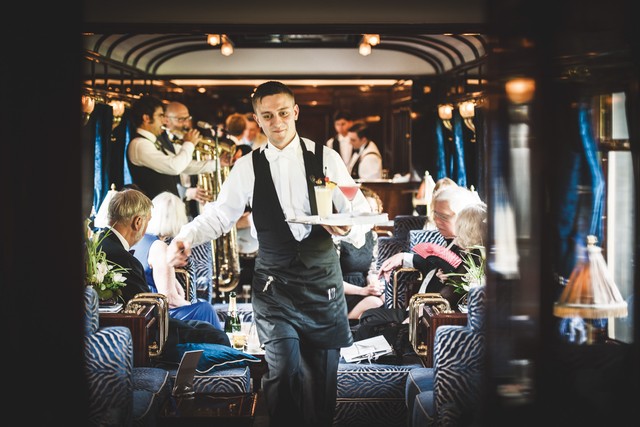 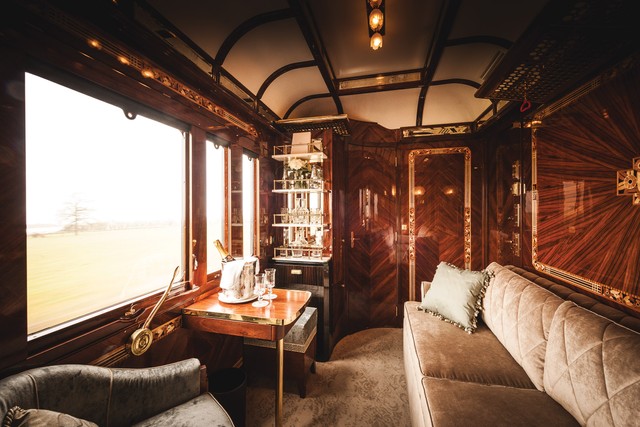 The bar and the interior of a suite on the Venice Simplon-Orient-Express, among the most famous trains in the world.

Well-heeled visitors to southern Africa board the Rovos Rail to travel from Victoria Falls to South Africa in high style. Nine journeys lasting from 48 hours to 15 days are offered; the handsomely rebuilt trains carry a maximum of 72 people in 36 superbly appointed suites and are also available for charter. The nine-day golf safari travels through the northeastern reaches of South Africa, with lots of playing opportunities for the most discerning golfers, along with ample game viewing. The ultimate Rovos Rail experience comes by way of the 15-day Trail of Two Oceans, which travels 4,300 kilometers coast to coast across the continent from the Tanzanian capital of Dar es Salaam to the Angolan city of Lobito. Passengers dress to match the formality of the environs—think fine china, crisp linen, and silver. Completing the timeless atmosphere, there are no radios or television sets on board.

Canada’s most decorated luxury scenic train line, the Rocky Mountaineer, has launched its first U.S. route. In addition to its three routes connecting Vancouver to the Canadian Rockies towns of Banff, Lake Louise, and Jasper, the newest offering travels between Denver and Moab, Utah. Known as “Rockies to the Red Rocks,” the two-day journey passes through vast canyons, natural archways, and captivating hoodoos. Spacious, glass-domed train coaches provide a comfy environment for taking in breathtaking scenery, and guests nibble on culinary creations inspired by the passing regions. For an elevated travel experience, customers on the Canadian routes can opt for GoldLeaf Service, featuring a bilevel coach with oversize windows and an outdoor viewing platform.

The interior of the Eastern & Oriental Express, pays homage to a bygone era. 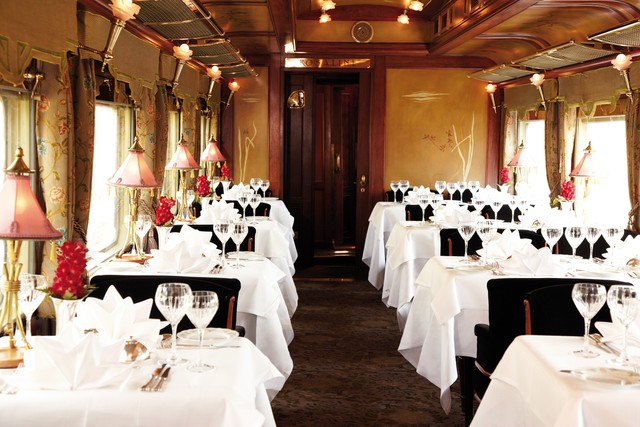 With its bold red and white locomotive taking guests on Outback adventures for just short of a century, The Ghan is an Australian icon. Traveling between the South Australian city of Adelaide and Darwin in the Northern Territory, the train’s motif honors its desert crossings and is a link to the Afghan cameleers who arrived in Australia in the 1830s. These desert pioneers were immortalized in 1929 when the first steam train—dubbed The Afghan Express but soon shortened to The Ghan—traveled north from Adelaide to the heart of the Outback. In the 1940s, The Ghan transported servicemen to World War II, and in the 1970s it became critical for mining, transport, and agriculture. Today, the train travels between Adelaide and Darwin as a three- or four-day, all-inclusive experience; it can reach up to a kilometer long in peak season with up to 300 guests on board. The menu tells the story of the country it travels through, proudly showcasing local ingredients and produce.

Journey Beyond Rail’s Indian Pacific offers epic, transcontinental crossings between the Indian and Pacific oceans. The longest journey, a four-day jaunt from Sydney to Perth, follows the path of bush pioneers, gold rush prospectors, and legendary adventurers, while the shortest rail option is a scenic, two-day trip from Sydney to Adelaide. The chic, private Chairman’s Carriage service evokes the golden era of rail travel, with its all-inclusive dining, access to the exclusive Platinum Club, and dedicated service.